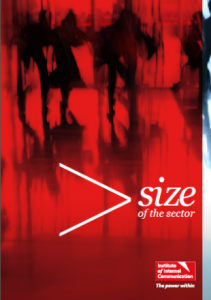 A recent study  by the Institute of Internal Communication has found that there are now over 45,000 people working in internal comms in the UK. This focused on those working in-house in the private sector, so this would suggest that overall figures are actually catching up on those for the PR profession, where research estimates about 62,000 practitioners

In considering these statistics, of course, we have to take account of the people who will be doing both internal and external comms (i.e. some individuals will appear in both these sets of figures), as well as those who are just focused on one or the other.

So there’s an army of people out there working in IC and trying to make employee communication as good as it can possibly be.

And I’d go as far as saying it’s a bit of a secret army. Apart from in the largest organisations where there are frequently individuals and teams focused on IC who have ‘internal communication’ or similar in their job titles, there are still a lot of organisations where internal comms probably doesn’t really stand out as an activity in its own right. There will be people trying to accomplish IC responsibilities within a broader communications, marketing or HR remit. There will be organisations that are achieving highly in employee engagement because they have a leader who is skilled in this area, but that doesn’t necessarily mean there’s a particular systematic approach to IC overall. Or the tasks will be spread around a variety of staff without a particularly clear or strategic overview. And there will be organisations where individual staff members are trying to achieve a lot with virtually no budget, because it’s not really seen as critical as marketing or PR or requiring as much attention.

Of course, It’s also more of a challenge for smaller organisations to take a systematic approach to internal comms, given all their responsibilities – regulatory and profit-wise in the short, medium and longer term  – with more restricted resources.

Despite people often talking about ‘PR’, the topic rarely gets any kind of sensible coverage in news programmes and there often seems to be some kind of negative or comedic ‘spin’ angle. Similarly, I can’t actually remember seeing a recent TV news item or feature about internal/employee communication. The closest would seem to be industrial relations stories and slightly creative offshoots (I achieved an interview on Business Breakfast for the Institute of Internal Communication (then the British Association of Communicators in Business) by focusing on the Plain English campaign. And related stories that appear outside of the specialist communications media sometimes seem to be ridiculing the idea that you should be employing internal comms staff at all i.e. anyone can do it and not much needs to be done anyway. The public sector seems to be real soft target in this respect, despite the obvious challenge of communicating within such large and complex organisations that are constantly subject to change and demanding targets.

The work of the Government-backed Engage for Success programme is helping to redress the balance somewhat by highlighting the role of effective employee engagement in sustained business success, including for UK SMEs.

I think all the Engage for Success research, publications, articles and toolkits also show that effective internal communication is by no means a straightforward activity. We all individually and within our membership organisations, such as the Institute of Internal Communication, need to constantly highlight what IC can achieve, what good IC looks like, and the skills and challenges it involves.

Progress is being made. And as the army of dedicated internal communicators continues to grow, hopefully so will the momentum to create a good understanding of the importance of the activity across the world of business and society as a whole.