What we can learn from female artists of a bygone era

What we can learn from female artists of a bygone era 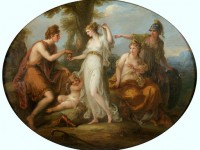 I've been thinking quite a lot about trailblazing women recently, inspired by International Women's Day but also very much by Professor Amanda Vickery's The Story of Women and Art  television series.

This featured the life stories of women artists from centuries ago who had successful careers at a time when this wasn't considered a suitable way for women to occupy themselves or indeed something they were equipped to be any good at.

For example, Sofonisba Anguissola was an Italian Renaissance painter who set a precedent for women to be accepted as students of art and became a court painter to Phillip II of Spain. And Angelica Kauffmann juggled a traditional family life with an illustrious career in London and Rome, becoming a Royal Academician shortly after the Academy's foundation. And let's not forget Artemesia Gentileschi who overcame some horrible life experiences, directly related to the status of women at that time, to be recognised as one of the most accomplished Italian Baroque painters in the generation following Caravaggio.

There's a lot to get indignant about in their experiences – the prejudice they faced, their difficulties in getting trained and the continuing injustice that accomplished female artists have tended to be forgotten with the passage of time or valued below contemporaries.

But there's a lot to be inspired by and learn from too. They followed their passion relentlessly, they weren't discouraged by obstacles, where a door closed they found another way, they were pragmatic, they could spot an opportunity, they know when to push forward and when to retreat to fight another day.

They can truly inspire us in pursuing our dreams and plans, and to not allow ourselves to get bogged down in difficulties or to become completely derailed when we can’t immediately get things to go our way.

And to be really grateful for the opportunities we have today, even though there’s still some way to go!