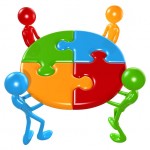 An ‘equality bias’ that leads people to give the same weight to the opinions of others, regardless of whether they are experts “damages” groups, according to a recent study.

Scientists have found that men give too much influence to colleagues with bad judgement and too little to those who are competent, even when the discrepancy is plain to see. (Not sure why the study focused on men, and whether this is at all relevant, but anyway).

Senior author Dr Bahador Bahrami (UCL Institute of Cognitive Neuroscience) said: “People are incredibly bad at taking differences in competence into account when making group decisions. Even when we showed them exactly how competent they each were, they still gave each other more or less equal say. Incredibly, this still continued when people were rewarded with real money for making correct decisions.”

One reason why we are so reluctant to treat people’s opinions with the respect or otherwise they deserve is thought to be the fear of leaving people out and hurting them in some way. It is also thought that people are reluctant to take sole responsibility for group decisions so they won’t push their views forward.

My observation would be that the rise of the collaborative and less hierarchical workplace has also contributed to this effect. Although very positive in most respects, this can lead to a reluctance to select one approach when it means rejecting one or more other ideas. Clearly caring about the feelings of others is important, but this can become counter-productive if it means indecisiveness and making choices that are not good for the organisation.

A technique widely employed in the armed forces is to ask the opinion of everyone in attendance, but to have those opinions ordered by rank of the individuals involved, from most junior to most senior. In theory, this allows the more junior participants the opportunity to speak without being constrained by the opinions of the more senior. But, relative to the equality bias, those opinions coming at the end are coming from those with the most experience and are weighted as such.

A true test of leadership today is the ability to embrace a collaborative approach while having the courage not to allow the equality bias to become all powerful. This may involve building systems, approaches, checks and balances into the decision-making process. It should also accommodate the fact that someone who is apparently not the expert in a given area, can, however, offer up some important new insights that could legitimately inform the way forward.

Making everyone feel that their views are valued, but that properly objective decision-making in the interests of the organisation rather than the individual has also taken place, are a true test of leadership today.